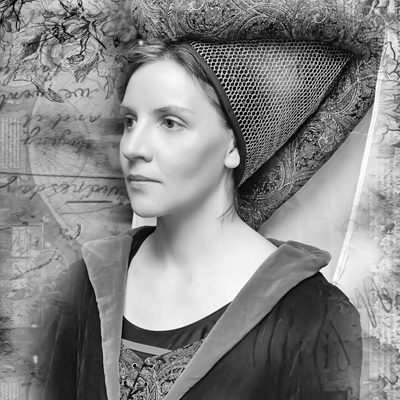 Born in Germany, her mystical experiences began at age 12. In her 20’s she joined a Beguine household where she lived until her early 60’s.(2) At that point she was pressured by ill health, incipient blindness and Church persecution into an unwelcome retirement at the monastery at Helfta, Germany, where she died some 12-24 years later.

Mechtilde began writing The Flowing Light in her 40’s; completing Books 1-6 over the next 20 years. She composed Book 7 at Helfta assisted by two nuns who went on to write their own books. Gertrude of Helfta (1256-1302) writes of her experiences in The Herald of God’s Loving Kindness. Mechtilde of Hackeborn (1240-1298) describes hers in The Book of Special Graces.

I first learned about Mechtilde in Carol Flinders, Enduring Grace. (3)
I was blown away by her poetry. As I came to know more about her life and times her lived courage was awesome. She not only risked talking and writing about her mystical experiences; she did so in her native German. This was at a time when a woman having such experiences was automatically suspect and using any other language than Latin to do so was against the law. The penalties could be imprisonment, torture and even death.

How is she a thought leader? Obviously she did not write about aging. For me, it is how her aging process unfolded and what she did with it that is inspiring. She had never wanted to be a nun. The beguine lifestyle gave her freedom from both convent and marriage—enabled her to travel—no small thing for a woman in medieval Germany. The move to Helfta required facing up to the realities of her failing health and a hostile church government—trading freedom for safety, the known for the unknown. That cannot have been an easy adjustment at her age.

How many of us are up against a similar quandary—freedom or safety? Complete personal sovereignty or the constraints of an established community where we are not in charge?

Mechtilde’s example provided inspiration and comfort as I navigated my own transition from the known to the unknown in search of safety. She kept on writing her truth and began mentoring the younger nuns. Without Mechtilde, would we have the amazing writings of Gertrude and the other Mechtilde?

In Her Own Words

“I cannot dance, Lord, unless you lead me.
If you want me to leap with abandon,
You must intone the song.
Then I shall leap into love,
From love into knowledge,
From knowledge into enjoyment,
and from enjoyment beyond all human sensations.
There I want to remain, yet one also to circle higher still.” (Pg.59)

A Fish Cannot Drown in Water

“A fish cannot drown in water,
A bird does not fall in air.
In the fire of creation,
God doesn’t vanish:
The fire brightens.
Each creature God made
Must live its own true nature;
How could I resist my nature,
That lives for oneness with God?”

A Prayer on the Last Page of Her Book

“Then we shall no longer complain,
Then everything that God has done with us
Will suit us just fine,
If you will now only stand fast
And keep hold of sweet hope.” (Pg. 336)

Sources:
(1) The Flowing Light of the Godhead
(2) https://en.wikipedia.org/wiki/Beguines_and_Beghards
(3) Enduring Grace