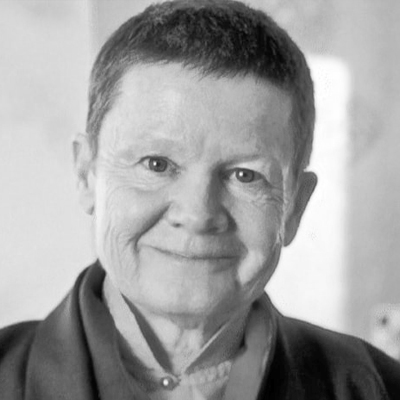 Pema Chödrön was born Deirdre Blomfield-Brown in 1936, in New York City. She attended Miss Porter’s School in Connecticut and graduated from the University of California at Berkeley. She taught as an elementary school teacher for many years in both New Mexico and California. Pema has two children and three grandchildren.

While in her mid-thirties, Pema traveled to the French Alps and encountered Lama Chime Rinpoche, with whom she studied for several years. She became a novice nun in 1974 while studying with Lama Chime in London. His Holiness the Sixteenth Karmapa came to England at that time, and Pema received her ordination from him.

Pema first met her root teacher, Chogyam Trungpa Rinpoche, in 1972. Lama Chime encouraged her to work with Rinpoche, and it was with him that she ultimately made her most profound connection, studying with him from 1974 until his death in 1987. At the request of the Sixteenth Karmapa, she received the full monastic ordination in the Chinese lineage of Buddhism in 1981 in Hong Kong.

Pema served as the director of Karma Dzong, in Boulder, until moving in 1984 to rural Cape Breton, Nova Scotia to be the director of Gampo Abbey. Chogyam Trungpa Rinpoche asked her to work towards the establishment of a monastery for western monks and nuns.

Pema currently teaches in the United States and Canada and plans for an increased amount of time in solitary retreat under the guidance of Venerable Dzigar Kongtrul Rinpoche.

Pema is interested in helping establish the monastic tradition in the West, as well in continuing her work with Buddhists of all traditions, sharing ideas and teachings. She has written several books: “The Wisdom of No Escape”, “Start Where You Are”, “When Things Fall Apart”, “The Places that Scare You”, “No Time to Lose” and “Practicing Peace in Times of War”, and most recently, “Smile at Fear”. All are available from our store. (1)

The only reason we don’t open our hearts and minds to other people is that they trigger confusion in us that we don’t feel brave enough or sane enough to deal with. To the degree that we look clearly and compassionately at ourselves, we feel confident and fearless about looking into someone else’s eyes. ~Pema Chödrön

“We think that the point is to pass the test or overcome the problem, but the truth is that things don’t really get solved. They come together and they fall apart. Then they come together again and fall apart again. It’s just like that. The healing comes from letting there be room for all of this to happen: room for grief, for relief, for misery, for joy.” ~Pema Chödrön

“Letting there be room for not knowing is the most important thing of all. When there’s a big disappointment, we don’t know if that’s the end of the story. It may just be the beginning of a great adventure. Life is like that. We don’t know anything. We call something bad; we call it good. But really we just don’t know.” ~Pema Chödrön, When Things Fall Apart: Heart Advice for Difficult Times

“When you open yourself to the continually changing, impermanent, dynamic nature of your own being and of reality, you increase your capacity to love and care about other people and your capacity to not be afraid. You’re able to keep your eyes open, your heart open, and your mind open. And you notice when you get caught up in prejudice, bias, and aggression. You develop an enthusiasm for no longer watering those negative seeds, from now until the day you die. And, you begin to think of your life as offering endless opportunities to start to do things differently.” ~Pema Chödrön, Practicing Peace in Times of War

Pema Chödrön How To Realize Your TRUE SELF

Bill Moyers on Faith and Reason with Pema Chödrön

Happiness Means Getting to Know Disappointment?

Other Video: Making Friends with Yourself – Online Course Sample Video