Duck, Death and the Tulip 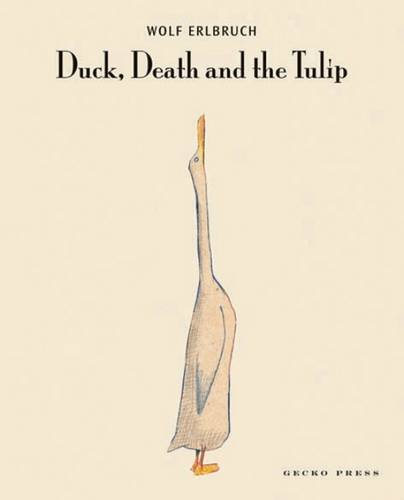 A dear friend sent me this enchanting book. The illustrator portrays the story of an evolving relationship between death and a being who has a limited lifespan, the duck.  The text is spare and to the point:

For a while now, Duck had had a feeling.

‘Who are you? What are you up to, creeping along behind me?’

‘Good,’ said Death, ‘you finally noticed me. I am Death.’

Duck was scared stiff, and who could blame her?

They go along together through the days of Summer, engaged in conversations. As Winter approaches, Death stays with Duck.

Something had happened. Death looked at the duck.

…then he carried her to the great river.

…he was almost a little moved.

I was struck by the depiction of Death as a skeleton draped in a kind of shapeless dress with only the skull visible. It is amazing how many subtle expressions the artist achieved.

I appreciate that this book presents death as a normal part of life.  I repeat—normal! Simple. Real. An ending. Both pathos and wry humor. I could see using it as a book club selection; also as a way into discussions about dying and death with family members, even children.

Dylan Thomas, the poet, exhorts us

Do not go gentle into that good night.
Rage, rage against the dying of the light.

and that might be the way for some. For me, when my time comes, I’d rather be Duck.