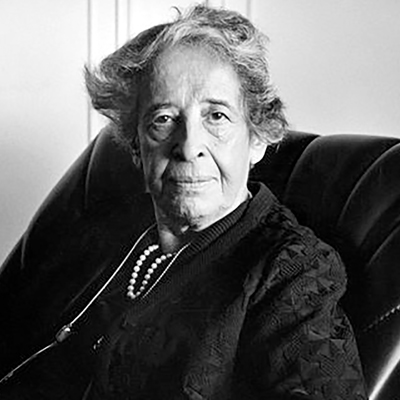 First off, I have to say that Hannah Arendt is one of my heroes. She embodies not just intellectual brilliance but the grit to survive one catastrophe after another. And she didn’t just survive; she was always an activist who kept thinking and teaching and talking and writing even and perhaps especially when many people dearly wished she would just stop.

Born in Germany in 1906, she experienced first-hand the darkness of Nazism and anti-Semitism both there and in a French internment camp. She studied philosophy under Martin Heidegger and Karl Jaspers. After her arrest in 1933 by the Gestapo for (then illegal) research into anti-Semitism she fled first to Czechoslovakia, then Switzerland and Paris where she was detained in an internment camp. Ultimately she escaped and made her way to the US via Portugal (1941). She had first-hand experience of being “stateless,” a person without papers, for 17 years. All during her “statelessness” she worked on behalf of refugees and fugitives trapped in the same nightmare. She became a US citizen in 1950. She taught at various colleges and universities; ultimately at the New School of Social Research. She died in 1975.

The current political situation in the US has sparked new interest in two of her works: On the Origins of Totalitarianism (1950); and, Eichmann in Jerusalem (1963).

For more detail including some great photographs, see Hannah Arendt>>>.

To Learn More About Her Work:

In Her Own Words:

“The result of a consistent and total substitution of lies for factual truth is not that the lie will now be accepted as truth, and truth be defamed as lie, but that the sense by which we take our bearings in the real world – and the category of truth versus falsehood is among the mental means to this end – is being destroyed.” (1)

“In an ever-changing, incomprehensible world the masses had reached the point where they would, at the same time, believe everything and nothing, think that everything was possible and that nothing was true. […] under such conditions, one could make people believe the most fantastic statements one day, and trust that if the next day they were given irrefutable proof of their falsehood, they would take refuge in cynicism; instead of deserting the leaders who had lied to them, they would protest that they had known all along that the statement was a lie and would admire the leaders for their superior tactical cleverness.” (2)

“Mass propaganda discovered that its audience was ready at all times to believe the worst, no matter how absurd, and did not particularly object to being deceived because it held every statement to be a lie anyhow. The totalitarian mass leaders based their propaganda on the correct psychological assumption that, under such conditions, one could make people believe the most fantastic statements one day, and trust if the next day they were given irrefutable proof of their falsehood, they would take refuge in cynicism; instead of deserting the leaders who had lied to them, they would protest that they had known all along the statement was a lie and would admire the leaders for their superior tactical cleverness.” (3)

“Before mass leaders seize the power to fit reality to their lies, their propaganda is marked by its extreme contempt for facts as such, for in their opinion fact depends entirely on the power of man who can fabricate it.” (4)

“Politically speaking, tribal nationalism [patriotism] always insists that its own people are surrounded by ‘a world of enemies’ – ‘one against all’ – and that a fundamental difference exists between this people and all others. It claims its people to be unique, individual, incompatible with all others, and denies theoretically the very possibility of a common mankind long before it is used to destroy the humanity of man.

We are free to change the world and start something new in it.” (5)

“The aim of totalitarian education has never been to instill convictions but to destroy the capacity to form any.” (6)

“It is indeed my opinion now that evil is never “radical,” that it is only extreme, and that it possess neither depth nor any demonic dimension. It can overgrow and lay waste the whole world precisely because it spreads like fungus on the surface. It is “thought-defying,” as I said, because thought tries to reach some depth, to go to the roots, and the moment it concerns itself with evil, it is frustrated because there is nothing. That is its “banality.” Only the good has depth and can be radical.” (7)

“There are no dangerous thoughts; thinking itself is dangerous.” (8)

“Clichés, stock phrases, adherence to conventional, standardized codes of expression and conduct have the socially recognized function of protecting us against reality.” (9)

“One must think with the body and the soul or not think at all.

In order to go on living one must try to escape the death involved in perfectionism.

Power corresponds to the human ability not just to act but to act in concert. Power is never the property of an individual; it belongs to a group and remains in existence only so long as the group keeps together. When we say of somebody that he is ‘in power’ we actually refer to his being empowered by a certain number of people to act in their name. The moment the group, from which the power originated to begin with … disappears, ‘his power’ also vanishes.” (10)

“Even in the darkest of times we have the right to expect some illumination, and … such illumination may well come less from theories and concepts than from the uncertain, flickering, and often weak light that some men and women, in their lives and their works, will kindle under almost all circumstances and shed over the time-span that was given them on earth.” (11)

“Storytelling reveals meaning without committing the error of defining it.” (12)