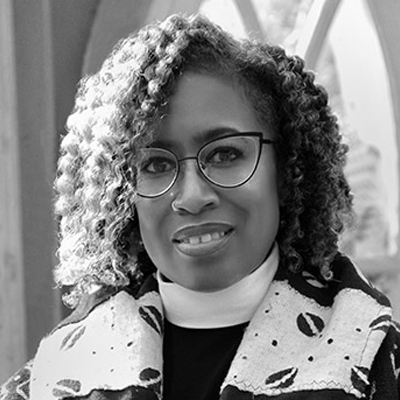 Unlike the other Thought Leaders on the website—people whose ideas and work have been companions for decades—I only recently discovered the work of Dr. Wilda C. Gafney. First, there was a reference in a book review“Midrash allows Jewish readers to engage the Scriptures as a participatory, collective text, what the Episcopal priest and bible scholar Wilda Gafney refers to as interpreting “not only the text before the reader, but also the text behind and beyond the text.” (1)

Then this year there was an intriguing ad for her book, A Women’s Lectionary for the Whole Church, A Multi-Gospel Single-Year Lectionary. I couldn’t resist! The book radiates energy and integrity. Got me thinking and praying in new ways.

Dr. Gafney is the Right Rev. Sam B. Hulsey Professor of Hebrew Bible at Brite Divinity School in Fort Worth, Texas. She is an author, Episcopal priest and former Army chaplain. She is also a formidable teacher and preacher—just listen to her videos.

I will be using the Lectionary for the coming Church year starting with the First Sunday of Advent in December. For now, I am immersing myself in her list of God Names and Divine Titles (p. 329-330) which include:

Click Here>> to learn more about her life and work…

“Biblical women are often generalized as a monolith of oppressed biblical womanhood. In my years teaching in theological classrooms and Jewish and Christian congregations, I find scripture readers unfamiliar with women Prophets (the subject of my first book, Daughters of Miriam: Women Prophets in Ancient Israel), or the more than twenty named Israelite and Judean Queens preserved in the text (addressed in my most recent monograph, Womanist Midrash: a Reintroduction to the Women of the Torah and the Throne), or the female assassins who execute their would-be rapists, or many other texts in which women have unexpected power and agency. A significant aim of this project is increased biblical literacy, beginning with Scriptures most neglected population.

Recognizing that the scriptures are an androcentric collection of documents steeped in patriarchy, this lectionary grapples with the gender constructs of the text rather than romanticizing admirable heroines. Indeed, it questions “admirable” constructs of womanhood rooted in birthing and mothering. The extent to which women’s narratives uphold the patriarchal agendas of the scriptures is held in tension with those passages in which women demonstrate agency, wielding power and authority. Sometimes those are the same texts.” (p. xiii)

“Because scripture is read and heard and understood contextually, I am mindful of the ways in which the Scriptures have been read and heard and understood in the broader Western and specifically American contexts. Across both testaments and the writings in between, slavery is ubiquitous, including on the lips of Jesus. While many translations use “servant” preferentially, I find this to be dishonest given that the persons so named were owned, controlled, raped, impregnated, bred, sold, maimed, and killed. Even when the bondage was of short duree or to pay off a debt, the lord and master had complete control of the subjugated person’s body and sometimes retained their children after their liberation. So while it is certain to produce discomfort in the reader and hearer, I preserve “slave” and invite the reader and preacher to wrestle with that term and its influence on and in crafting and defending the American slave autocracy. Minimizing the footprint of slavery in the scriptures weakens the link between them and subsequent slaveholding societies and the churches that unite them and us.” (p. xxiii)

“… monarchy and its conventions have given us language for God, imperfect but familiar as the psalm amply demonstrates. Jesus takes that language and those conventions and inverts them; the reign of God and its majesty are very different from the splendor of the world’s sovereigns.

To the fallen Judean monarchy and their Babylonian colonizers and occupiers, Jesus says the poor of the land who were deemed not worth the labor to even deport are at the heart of the reign of God. The majesty of Christ is not found in treasures of temple or palace, burgled and broken apart, but in a crown of thorns beaten in by bullies and in his battered and denuded body. This human, mortal, woman-born Jesus is the glory and majesty of God; in the words of the Epistle to the Hebrews, “the brilliance of God’s glory and reproduction of God’s very being.” That humanness, shared with every girl and woman, boy and man, non-binary child and adult, is also the majesty of Christ and our own.” (p. 328)

Holy Blackness: the Matrix of Creation

Sexuality: What Does the Bible Say About Sexuality?